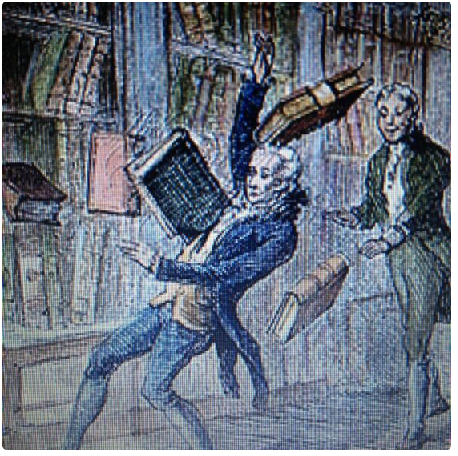 The last week before the Christmas holidays, I had the chance to go back to my beloved home region: Alsace and to give lectures about cosmology and philosophy to high school students there. I was assisted of my good friend and newly doctor Maxime Enderli.
Usually, at the end of my lecture, I gave the students a list of books that was meant to help them to go further than my humble intervention. I feel that the list might interest the readers so I leave it on the blog.
-The evolution of physics, A. Einstein et L. Infeld, 1938: I mainly remember of a long conceit between physics and a police inquiry. Trying to understand nature is done by collecting clues one by one. Interestingly enough, writing this book at the begginig was just an excuse to save the jewish Leopold Infeld from the nazi's claws. Anecdotally, it has eventually become a bestseller. This books came to my hand in the university of Paris thanks to my good friend cosmologist Clément Martinache.
-M. Tompkins, G. Gamow, 1940: An interesting essay based on the idea that the weird and counter-intuitive effects of general relativity and quantum mechanics are present in our everyday lives. It was another good friend from my university JB Durrive who draw my attention to this book.
-Poussière d'étoile, Hubert Reeves, 1984: Amazing french popularizer, all of his books are good. This book speaks about formation of chemical elements. The focus is on the elements formed inside stars by fusion reactions. It was my first book which spoke about astrophysics and I remember discovering the mysteries of the stars while hiking in the Pyrénées.
-QED: The Strange Theory of Light and Matter, R. Feynman, 1985: I just finished this nice book from the american master of popularization: R. Feynman. His aims are to explain complicated topics of physics (in this case Quantum Electrodynamics) withou any mathematical background required. Most of Feynmann books are refreshing and advisable. Again it is a physics friend Pierre Jouvre who told me about this book.
-Faster than the speed of light : the story of a scientific speculation, Magueijo, João, 2003: João Magueijo was my general relativity teacher in Imperial College. I quite liked the book eventhough the opinion of the author are sometimes quite controversial. The book is full of fun anecdotes about the author's life. For instance, the time he got an epifany while peeing on a tree during a night in Goa or the time that a student asked for a beer during an exam in Cambridge in agreement with the existing laws. Inflation and near to the big-bang physics are well popularized.
-Le cosmos et le lotus, Trinh Xuan Thuan, Albin Michel, 2011: A bit like Hubert Reeves, all his books are well written and discuss more about astrophysics than cosmology.
-The cosmic cocktail, Katherine Freese, Princeton university press, 2014, A book which popularize the latest development in cosmology, especially regarding dark matter. It is also full of anecdotes about the author's personal life which renders the book living and informative.
-Les coulisses de la création, Karol Beffa and Cédric Villani, 2015: I just stumbled on this book during the christmas holiday with my family and I read it in 24 hours. It is based on a dialog between the two authors which discuss the process of creating something. Cédrid Villani is mathematician and Karol Beffo componist so the debate is living and intersting, there were student together in Ecole Normale Supérieure and have a lot of fun anecdotes about that period. They give their opinion on a ranging number of topic like the place of women in science and the way their respective disciple is taught.
Fil Rss des articles